N0m and the rest of staff are hard at work on upcoming content and features.
For example you may have noticed the new Miniquests section in the quest tab.
This keeps track of your miniquests, including objectives, task progress, and rewards. We are excited to announce that we are working on an

This map will be like an extension of the minimap, showing your location in the larger world.

New players especially will appreciate an in-client map, since it will help them become quickly versed in original and new content.

N0m has been tinkering with even adding dungeons and floor plans to the world map.

(As usual, he is working on innovations no developer has attempted in RSCPS! Unfortunately, we have had to take steps to stop people from stealing n0m's inventions. That has happened in the distant and not-so-distant past, and we're tired of it. n0m's work deserves more respect, from creating mobile RuneScape, coding the market and innumerable other features, and everything that is still in the development pipeline. So we just bought a high-end obfuscator to put a stop to all that.)

Some features we plan to include:
-Drawn from live landscape file - updates automatically with new map additions!
-Show the location of your mutual friends outside the wilderness.
-Display town names, points of interest, skilling locations, quest beginnings, banks, and so on!
-"Search" bar to list and/or zoom in on what you're looking for

What ideas would you like to see implemented in the in-game world map?

That's awesome and will be really handy! Thanks!

Updates like these are why people don't mind buying subs!

Assuming this uses the same search as the market then it needs to be improved (see Damerau–Levenshtein distance).

The minimap looked awesome, can't wait for it to be implemented so I don't need to keep an world map open in browser

Is there somewhere I can find a list of all the npcs that give out mini quest?

Is there somewhere I can find a list of all the npcs that give out mini quest?

Pretty cool, I found it annoying, but fun, searching for all the mini quests. Most were straightforward but this will help with tricky ones.

In game map is cool too, I noticed the 'worldmap' link is just ripped from classic, missing all the edits, had to use a landscape generator to look at the wilderness edits

How can i see how the minimap looks in game my man billy?

We're planning to release the world map this weekend. FYI. It's been a long week working on things, that you probably won't notice as they are related to the client core, and server core, and our own game panel... But I assure you it's been a really long week for me.

World map in the state it's currently as of writing this, and I emphasize; This map is generated from a map-generator application I wrote specifically for RSCRevolution, nobody else has this high quality map generator for RSC, and I doubt anyone will be able to make one as they lack the knowledge of RSC format:

This is what our new game administration panel looks like:

AS you can see from the charts, we're doing good activity wise.  (The drop at end is for today, it hasn't been a full day yet)

I spent days on reworking our sprite editor, and our sprite format to make this happen:

This is very efficient set of tools required to develop and maintain the game in professional manner. Which I can guarantee nobody else has, nor have the imagination(But I expect copycats to replicate my work again) or skills to make themselves, although the sprite editor is still work in progress but it's usable, and I'll leave it at that as I need to work on several other things that are higher priority.

Showing off search and tooltips.

Seriously can't wait to get this into the game

it's so useful, especially to new players who are not already familiar with the game, quests or the map itself.

Oh, it's awesome!  Been testing it out for a few hours now

Wow this looks amazing! Great work everyone cant wait to see it in action after i pay my phone bill fml..

Hello, sorry for not keeping you up to date!
As you probably saw I started on working on two factor authentication system as someone started logging on characters who had not changed password since last year.
I said that we would release world map this weekend, but there has been few issues, which of one is our email server which really isn't up for the task of two factor authentication, or opt-in newsletters( which ive planned to start sending ). So I've bought and configured an email server and it should be good to go starting from tomorrow.

As for the world map, mod cola and white have been fixing up the labels that were a little off and added couple new icons for a more polished result. So we're good on everything but... 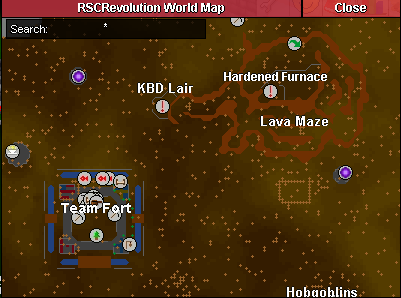 There are memory issues, world map by itself is 125MB once loaded into memory, and I have to address this issue before I can release it. This is where I have to make choice of which hardware resource I will be utilizing more, the CPU or the RAM?.
I'm thinking of somewhere in the middle ground.

125MB RAM is something everyones PC has to spare, but that isn't the reason alone why this needs to be addressed first. For some reason default JVM max memory settings are set to 256M or less(should be 1/4 of physical memory though) for some users and it means that users will suffer from clients crashing at loading screen and they would need to launch the client using custom JVM parameters... we can't have that. I'll look into all kinds of solutions, maybe I don't have to do anything and can just let the client decide it's own JVM parameters.